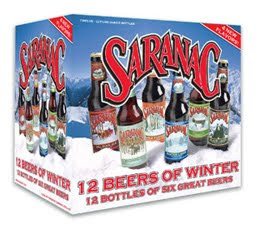 To celebrate the release of the 12 Beers of Winter, Saranac graciously invited many of the local and national beer bloggers to visit the brewery for a private tour and beer dinner, as well as putting the bloggers up in a local hotel. Yours truly was unable to attend but summaries can be found on several of the better beer blogs. The crew over at 2BeerGuys did a three part series (Part 1, Part 2, Part 3) chronicling the event. Our good friend Blake from The Brew Authority dedicated a blog post and a podcast to the dinner.


While, I did not attend the dinner, you know TheFoamingHead is the place to go for the best beer ratings, and have provided my thoughts and scores on the 12 Beers of Winter. Check back daily for more ratings.

Thanks for the podcast shout-out. It was definitely a fun trip, sorry you couldn't make it. Definitely appreciate your beer reviews, always very fair and balanced.