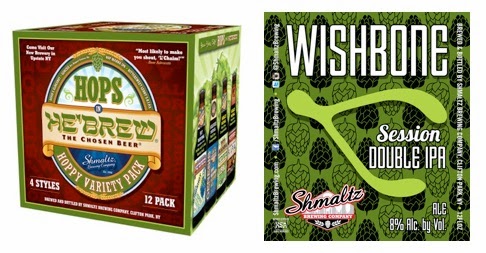 Tuesday, April 28, 2015 -- There's no better time for a delicious hopped-up variety pack then the kickoff of summer, and Shmaltz Brewing Company's got all the hopheads covered with the return of the Hops In HE'BREW Variety Pack®. Available at retail stores across the country starting in May 2015, the HE'BREW 12-pack is one of the very few hop-centric variety packs currently on shelves that includes a double IPA, Wishbone Session Double IPA®. IPA's are the most popular single beer style in the American craft beer market right now, and there is little indication that our desire for the hop leaf in our brews is abating anytime soon. It's time to celebrate warmer days with your favorite hoppy HE'BREWs!

Hops In HE'BREW Variety Pack® (May - August 2015)
Ever wonder How To Say "Hops" In He'brew?! With the release of the Hops In HE'BREW Variety Pack®, Shmaltz Brewing gives a brand new meaning to "adult education." Kickstart your summer with a refreshing variety pack, filled with equal parts of Genesis Dry-Hopped Session Ale® (Silver Medal, World Beer Championships), Hop Manna IPA® (95 Rating, Ratebeer.com and Gold Medal, World Beer Championships), Shmaltz's latest addition to the year-round line-up, Slingshot American Craft Lager® (97 Rating, RateBeer.com), and the new Wishbone Session Double IPA®. Variety packs are the spice of the craft beer world and the fourth most popular craft beer package in the country. Combine the enthusiasm for variety packs with the fervor over hoppy beers and you have a match made in craft beer heaven.

What should Shmaltz call Wishbone...a single, a double...a Sessionable beer that falls somewhere in the middle? Wishbone® is not as aggressive as the 10% Bittersweet Sweet Lenny's RIPA® and stronger than the 6.8% Hop Manna IPA®. With a tradition of brewing extreme beer and a love for pushing style boundries, Wishbone Session Double IPA® is just right. Not too big, not too small, chock full of juicy hops balanced by light pale malt to create a highly drinkable beer.

"Wishbone pours a clear, bright gold with a fluffy white head and light, sticky lacing throughout the glass," said Shmaltz Brewing Company's Lead Brewer Richie Saunders. "Wishbone's nose boasts tropical citrus notes of pineapple, lychee and brilliant pear accented by a light pine resin. Wishbone offers a medium mouthfeel with big, sweet hops balanced by a bready finish offered by mostly pale malt with a touch of Brewer's Oats, Maris Otter and Victory to add just enough backbone to support the intense hop quantities. With an aroma and taste more sessionable than it's 8% ABV body lets on, "This 'Bone's For You!"
To find a wholesaler in one of the 37 states Shmaltz beers are distributed, visit shmaltzbrewing.com/HEBREW/distributors.html
About Shmaltz Brewing CompanyRanked in 2013 as one of the "Top 100 Brewers in the World" by RateBeer.com, Shmaltz won 9 Gold and 5 Silver Medals in the World Beer Championships in 2012. A recipient of the "Distinguished Business Award" by the Brooklyn Chamber of Commerce, Shmaltz was also included in the "Top 50 Fastest Growing Bay Area Companies" by San Francisco Business Times.

Founder and owner Jeremy Cowan established the company in San Francisco in 1996 with the first 100 cases of HE'BREW Beer® hand bottled and delivered throughout the Bay Area in his Grandmother's Volvo. HE'BREW® now sells across 37 states, through 40 wholesalers and nearly 5,000 retailers. In 2007, Shmaltz released a new line of craft brewed lagers under the Coney Island® banner. The Coney Island brand was recently acquired by Alchemy and Science, a craft beer incubator, owned by Boston Beer (Sam Adams).

After 17 years of being an outspoken cheerleader for contract brewing, Shmaltz recently broke with tradition and opened its own New York State production brewery in Clifton Park, NY, 10 minutes north of Albany's capital district. Shmaltz's new home boasts a 50-barrel brewhouse with 20,000 barrels of annual capacity. The new brewery packages 12 and 22 ounce bottles and kegs of their diverse core and seasonal favorites, and hosts fans and beer tourists in their new tasting room for tours, barrel-aged previews, and special releases.

In 2010/11, Cowan published his small business memoir, Craft Beer Bar Mitzvah: How It Took 13 Years, Extreme Jewish Brewing, and Circus Sideshow Freaks to Make Shmaltz Brewing Company an International Success. A free sampling of Chapter One and suggested beer pairings, can be viewed at www.craftbeerbarmitzvah.com. In 2012, Cowan spearheaded the creation of the non-profit New York City Brewers Guild (which manages NYC Beer Week) and served as its Founding President.