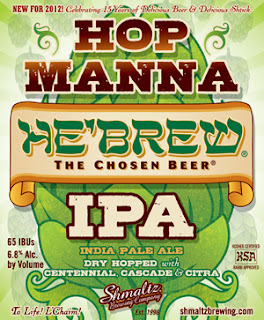 HE'BREW BEER INTRODUCES ITS FIRST NEW YEAR-ROUND CREATION IN 4 YEARS:
Hop Manna IPA
Just when you thought there were no more Hop-related names left to exploit: Enter the Torah!
Dry Hopped, 6.8% Alc., 65 IBUs
February - March 2012 and beyond...
New York, San Francisco, Beyond - February 14, 2012 - All ye wandering the vast Macro Beer Desert, thirst no more! Introducing Hop Manna® -- the first-ever single IPA from HE'BREW Beer® and a gift from the Craft Beer Promised Land. Hop Manna® is the answer to hop heads prayers for a delicious IPA bearing floral and citrus flavors. At 65 IBUs and 6.8% ABV, Hop Manna® is crafted to provide session after session of hop nourishment from the Shmaltz Tribe to yours. Hop Manna® is now nationally available in 22 oz. bottles and a limited amount of draft at select bars.

The national craze for IPAs is at an all-time high. TheBeerBible.com announced in December 2011 that IPA is currently the second fastest growing category in the US with more than 40% growth over the past year. After 4 Test Batches throughout 2011, Hop Manna® is bound for glory as Shmaltz Brewing premieres an advance copy of the HE'BREW offering at SF Beer Week (February 10 - 19, 2012). Hop Manna® features six robust hops (Warrior, Cascade, Citra, Amarillo, Crystal, Centennial), three dry hops (Centennial, Cascade and Citra), and is balanced out with five delicious malts (Specialty 2-Row, Wheat, Munich, Vienna, CaraMunich 40). Not a San Diego IPA (enticing as they are) and not trying to re-create the excellent standouts from friends such as Dogfish, Founders, Lagunitas, Three Floyds and so many others, Hop Manna® aims to create a unique story -- and flavors - of its own.

Shmaltz is no stranger to hops. In celebration of their 10th Anniversary (2006), HE'BREW Beer® introduced its award-winning rye-based double IPA, Bittersweet Lenny's R.I.P.A.® (now available in 4-packs, 12 oz. bottles). The standout robust brew has become a year-round staple in the HE'BREW Beer® line-up; it's garnered a "98 Rating" on Ratebeer.com, and recently took home a Gold Medal at the 2011 World Beer Championships. Boston Phoenix touted Lenny's R.I.P.A.® by saying, "[Bittersweet Lenny's] pours a rich, deep mahogany color, topped with a billowing viscous head. The Flavor? Allow me to quote from my notes: WOW."

Shmaltz also recently redesigned both the packaging and the recipe for its original creation and flagship beer, He'brew Genesis Dry-Hopped Session Ale, which shipped to wholesalers nationally over the last 2 months.

About Shmaltz Brewing Company
Shmaltz Brewing Company was named "Best American Craft Brewer" and won the "Best In Show 2010" title by Beverage World Magazine, after being named "Breakout Brand" for 2009. Just this week, ranked in 2012 as one of the "Top 50 Brewers in the World" by RateBeer.com, Shmaltz was also included in the "Top 50 Fastest Growing Bay Area Companies" by San Francisco Business Times, and is a recipient of the "Distinguished Business Award" by the Brooklyn Chamber of Commerce.

Established in San Francisco in 1996 with the first batch of 100 cases of HE'BREW Beer® bottled, labeled, and delivered by hand, Shmaltz has sold more than ten million bottles of beer to date. Along with their acclaimed line of HE'BREW Beers®, Shmaltz introduced its new line of sideshow-inspired Coney Island Craft Lagers®. Shmaltz offerings are available in more than 30 states through 35 wholesalers at more than 3,500 retail specialty shops across the U.S., including Beverages & More, Whole Foods, Total Wine, select Krogers and Cost Plus.

From the label of Hop Manna®


In the book of Exodus, the ancient Hebrews survived 400 years of bondage before the ultimate supreme court dropped the 10 deadly Plagues on the land of the taskmasters and the head dictator, Pharaoh. Even then, only begrudgingly, did he Let My People Go. The freedom ride across, nay through the sea left a band of wandering nomads broke and suffering, no doubt with a profound hunger - and a mighty thirst. Enter the Manna: a glorious gift to nourish body and soul. Manna was said to combine the tastes of everything most delicious to each individual, depending on their desire. And as the Good Book says, Each shall gather according to one's need and shall enjoy a double portion for thine chosen day of rest. Manna fed the entire tribe, but tradition suggests the righteous received manna ground in a heavenly mill, while the wicked had to grind it below for themselves. Hear o' Tribe of Shmaltz - Behold: A celebration of the flower of the craft beer revolution! A golden opportunity to feed your inner hop head and rejoice in HOP MANNA, our newest delicacy of the modern He'brew Beer family. L'Chaim!
Posted by The Foaming Head at 5:31 PM