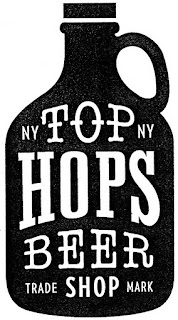 New York, NY [January 19, 2012] - Top Hops Beer Shop is now open at 94 Orchard Street on the Lower East Side in Manhattan. A retail store and tasting bar designed to showcase great beer from around the world, Top Hops offers a selection upwards of 700 brands, both American craft and import, available for purchase and on-premise imbibing.

Top Hops encourages people who are passionate about beer to come together to share their enthusiasm and gain a better understanding of the magic that is hops, yeast, barley and water. And to make Top Hops a true hub for dynamic beer experiences, Top Hops will host guest brewers, visiting beer writers and beer pairing seminars.

Don't know a Double IPA from a Dopplebock, or Saaz hops from the American Cascade variety? Not to worry, Top Hops welcomes beer drinkers of all knowledge levels, from the geek to the novice. Owner Ted Kenny has created a welcoming, unpretentious environment that encourages experimentation and -- most importantly -- fun. "It's beer, after all," says Kenny. "Hopefully we will introduce our customers to beers or styles they have never heard of or tried before."

Serious beer drinkers, however, are in for a treat. A 30-foot custom-built wood and polished aluminum bar invites customers to belly up and enjoy a tasting flight or a glass of any of the 20 beers on tap, as well as any bottle available in the store. Five of the 20 taps are dedicated to regional breweries including Greenport [Long Island], Kelso [Brooklyn], Captain Lawrence [Westchester, NY], Troegs [Hershey, PA] and River Horse [Lambertville, NJ]. Rotating taps will feature seasonal beers, limited editions and other hard to find selections, both domestic and imported. Growlers are available in 64-oz and 32-oz sizes for take home.

Never one to discriminate, Kenny has dedicated a tap line to Budweiser. "When served properly and stored and treated the way the brewer intended, Bud is in fact a good example of its style of beer, American Lager," explains Kenny. "Most places don't treat it properly, which is the issue."

Here's a fact that will make beer geeks smile, and give everyone the chance to taste the beers as they were meant to be tasted: Top Hops cleans their own draft lines and never goes longer than two weeks between cleanings. They are fanatic about clean draft lines. A blackboard behind the bars lists the date that each line was cleaned along with other pertinent details, including the date the keg was tapped, IBU, style, brewery, brewery location, and a description of the beer.

The bottle selection consists of nearly 700 brands and spans the globe with unparalleled breadth and depth. Top Hops works tirelessly to offer an unprecedented selection, with possibly the best selection of Belgian beers in New York City, including DeuS, Glaven Toren Saison and Contreras. Approximately half the inventory is dedicated to American craft beers, including offerings from cult gypsy brewers like Brian Stillwater of Stillwater Artisanal Ales.

A small menu of beer-friendly items is available, including a rotating selection of cheeses, charcuterie, olives, Mast Brothers chocolate and German-style pretzels, all sourced from The Essex Street Market around the corner. A small selection of wines by the glass, as well as non-alcoholic beverages, are also available for non-beer drinkers.

A native New Yorker, Ted Kenny spent 12 years in finance before seeing the light and moving to the beer business in 2006. He worked for the Anheuser-Busch/In Bev brewery and then distributor, learning something every day about beer. Kenny is a Certified Beer Server from the Cicerone Certification Program and is on his way to becoming a Certified Cicerone. Similar to the process of becoming a Master Sommelier, a Certified Cicerone undergoes an exam that demonstrates a vast knowledge of beer, from its history, its different styles and how to pair them with food, as well as a working knowledge of draft beer equipment and proper storage.

All Top Hops employees are required to become Certified Beer Servers. This commitment to knowledge and education is paramount to Kenny, "What's the point of offering 700 beers if my staff can't answer questions about them or pour them in the correct glass?"

Architect Russell Glover has created an inviting space using a palette of concrete, wood and aluminum - all the materials commonly found in a brewery. The heart and soul of the store are the two 26-foot long glass refrigerators that hold the cold bottles (organized by place of origin) and kegs that hug the right and left walls of the store, underneath an arched white-washed ceiling designed to look and feel like a beer cave.

Great beer location. Only found it in April, but an avid visitor. Ted is the nicest guy and the staff is top notch. If you're in New York and enjoy a great beer in a chill location, visit Top Hops Beer Shop.