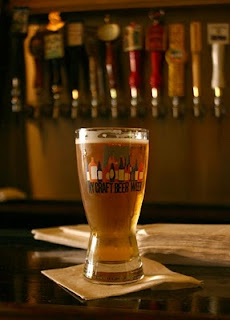 New York, NY - August 17, 2010 - Internationally recognized as one of the top craft beer destinations in the world, the 3rd Annual NY Craft Beer Week presents an outstanding line-up of special events and promotions happening in all five boroughs from Friday, September 24 - Sunday, October 3, 2010. The 3rd Annual NY Craft Beer Week rounds up today's top craft breweries available in the city and local chefs, over 100 beer destinations and 30 renowned restaurants for a delicious showcase of local brews, specialty food and beer pairing menus, educational tastings and tours, boutique beer festivals, and the release of the official beer of the Week: Geektoberfest. Brewed by Shmaltz Brewing, Captain Lawrence Brewing, and Ithaca Beer Co., Geektoberfest is blended and barrel aged, and available on draft only for purchase at various craft beer bars across New York City.

New York City beer enthusiasts and foodies alike will have the opportunity to enjoy over 100 craft beer destinations with the much-anticipated NYC Beer Passport 2010, the official NY Craft Beer Week program and resource guide. Passports are $10, and patrons will receive promotional deals and discounts on selections from their favorite craft breweries at participating venues. Each venue will feature one specific brewery, and instead of paying $6 or $7 per glass of beer, it's only $3 for the same beer through the Passport program (Passports have an offer for one serving at each bar). A majority of the bars will also offer a promo of their choice through Labor Day 2011 to extend the Passport's value for those consumers unable to visit every bar during the Beer Week. Passports are available for purchase now at www.nycbeerweek.com and at each participating venue beginning September 9, 2010.

Passports include a calendar of all the featured events with a detailed description of each event, special editorial sections written by influential beer writers and industry insiders, FAQ's about NY Craft Beer Week, a list of all the participating restaurants with Zagat's "Beer Pairing Menus," a list of all the bars and retail outlets involved with NY Craft Beer Week, and much more. An iPhone app will become available in early September 2010 reflecting an interactive version of the Passport and NY Craft Beer Week website. The user interface will incorporate the iPhone software's ability to provide location based browsing of information for discovering the events in closest proximity to the user.

Please see the list below highlighting the special events and promotions happening during the 3rd Annual Craft Beer Week:

*NYC Passport 2010. Passport holders have access to special promotions at 100+ craft beer venues all over New York City (during the Beer Week and throughout the next year)!

*Zagat Sponsored "Beer Pairing Menus". Happening throughout the entire Beer Week, Zagat will present three-course beer and food pairing menus at such prestigious places as Mas (farmhouse), Colicchio & Sons Tap Room, Eleven Madison Park, Blue Smoke, Megu and 25+ additional restaurants. Each restaurant has the option of pricing their dinner pairing for either $40, $65 or $90 per person.

*Get Real NY Cask Ale & Food Festival (135 W 18th Street, NYC: Saturday, September 25 & Sunday, September 26, Sessions at 12 pm & 5 pm, VIP Session from 4 pm - 5 pm). A one-of-a-kind tasting event, Get Real will have specialty cask-conditioned beers from all over the world (including several from NY area homebrewers) and an assortment of artisan eats from nearby restaurants specializing in locally sourced food. Event details can be found at getrealny.com.

*Voyage of the IPA w/ Brooklyn Brewery's Brewmaster Garrett Oliver (On board The Clipper City of Manhattan by Sail from South St Seaport: Saturday, October 2, 4:30 pm). Garrett Oliver and the brewing team at Brooklyn Brewery lead a hoppy journey into their brewing past with tastings of three Brooklyn IPAs and additional selections from Captain Lawrence and Goose Island. The event will take place on Manhattan by Sail's magnificent 158-foot schooner sailing around New York harbor featuring Garrett's tales of IPA's original heyday.

*Beer Walks. Hosted by Urban Oyster and other leading tour guides, some of the featured tours will include "Brewed in Brooklyn," "Fermented NY," "Food Cart Tour," "Bike Brooklyn Beer Blitz!," "Homebrewers Tour," and other tours taking place throughout the boroughs.

Josh Schaffner, Director of NY Craft Beer Week, comments about the upcoming craft beer extravaganza, "Historically, beer was enjoyed throughout New York City by a diverse cross-section of its denizens and in all manner of everyday life. In the city today, there is an incredible community surrounding craft beer that is so exciting in the ways it presents beer more and more as that same staple of everyday life. We are delighted in the continually expanding offerings of the Beer Week to provide more and more outlets and ideas for everyone from all walks of life to be able to enjoy craft beer as prominently in our lives as our fore-bearers."

Brooklyn Brewery's Brewmaster Garret Oliver says, "NYC Beer Week is a great opportunity for people to check out the creativity and talent of New York's brewers. New York City is famous for having the best of everything, and NYC Beer Week is going to show off America's most diverse and exciting beer scene."

NY Craft Beer Week is proud to have Brooklyn Brewery as a sponsoring brewery, Zagat Survey as a food partner, All About Beer Magazine as the exclusive beer media partner, and Just Food as a charitable partner.


About NY Craft Beer Week
NY Craft Beer Week is an idea born to fully appreciate the quantity and quality of the bars around us, and the beer that they serve. There is good beer to be had all over the City, and this is your opportunity to try it all and experience our great city, and the beers to be found within its borders. It is as much about civic pride as it is about taking value in the splendors available to us. NY Craft Beer Week's focus is to fuse libation education with community appreciation, thereby giving patrons the opportunity to gain new favorite breweries, beers and bars to enhance their regular repertoire throughout the year. Learn more at: www.nycbeerweek.com.