AOL Says Brooklyn Brewery Has The Best Beer in NYC 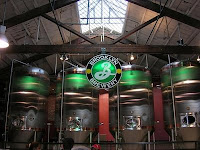 AOL City Guide recently nominated a list of places for their best of beer in the category of best nightlife for New York. Brooklyn Brewery was the winner, but the list also included some of New York's best beer bars such as dba, The Ginger Man and Spuyten Duyvil.

While I will agree that Brooklyn is definatly a place to go to for great beer while in New York, I have a hard time believing that it is the best. I would much rather go to a beer bar where I can be offered more then one brand of beer. It is nice to see that craft beer is getting more and more press with each passing day. Cheers to AOL!


Read Full Article
Posted by The Foaming Head at 8:49 AM