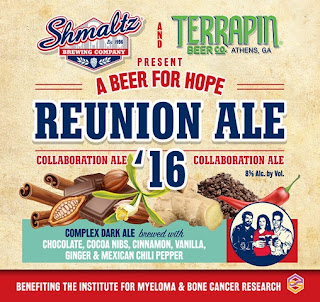 Clifton Park, NY -- Thursday, July 7, 2016 -- In celebration of its 20th Anniversary, Shmaltz Brewing Company continues its efforts to raise funds for the Institute for Myeloma and Bone Cancer Research (IMBCR) by collaborating with Terrapin Beer Company for the sixth year to brew Reunion Ale '16 -- A Beer For Hope® (8% ABV). Myeloma is the 14th leading cause of cancer deaths, and in 2014, an estimated 24,050 new cases were discovered. Each year, Reunion Ale® is brewed in memory of Virginia MacLean, a dedicated cancer research supporter who lost her own battle with Multiple Myeloma in 2007. MacLean's wish to continue building awareness on behalf of the IMBCR is achieved through her dear friends and co-workers Alan Shapiro and Pete Slosberg's (creator of Pete's Wicked Ale™) work with Shmaltz and Terrapin for the annual release of Reunion Ale®.

The brand new recipe for Reunion Ale '16® features a Complex Dark Ale with Chocolate, Cocoa Nibs, Cinnamon, Vanilla, Ginger, and Mexican Chili Pepper. Reunion Ale® is exclusively brewed at Shmaltz in Clifton Park, NY with Terrapin Brewmaster Brian "Spike" Buckowski traveling from Georgia to Upstate NY to help brew the latest collaboration. The Reunion project has raised more than $130,000 for the IMBCR. Craft beer fans can donate money directly to the IMBCR at Shmaltz & Terrapin hosted Reunion® fundraising events and on imbcr.org.
"Reunion 2016 takes a variety of crystal malts, as well as Munich, Kiln Amber and Victory malts to balance elements brought by a Belgian Monastery yeast," says Shmaltz Lead Brewer Richie Saunders. "Together, subtle spice notes compliment the characteristics of the favorite autumn style. Our Shmaltz spin on the style includes extra special ingredients adding our typical flare -- chili pepper extract, bourbon vanilla, ginger and cocoa nibs. Reunion 2016 brings a rich, deep brown/ruby color with a classic Belgian aroma complemented by spices with a subtle heat in the background. The smooth flavor of Belgian yeast and silky vanilla provides a mellow sipping experience with a slight bite from the chili pepper and ginger later in the finish."
National Reunion® fundraising events will occur throughout the summer and will be announced in the coming weeks. Events will also be listed on Shmaltz's event calendar at shmaltzbrewing.com.

About IMBCRThe Institute for Myeloma and Bone Cancer Research is dedicated to independent research on developing effective therapies that improve the quality of life and longevity of patients with myeloma and bone cancer. Myeloma and bone cancer are two of the fastest growing diseases in the world, afflicting more than one million people in the U.S. alone.

About Shmaltz Brewing CompanyFounder and owner Jeremy Cowan established Shmaltz Brewing in San Francisco in 1996. The first 100 cases of He'brew Beer® were hand-bottled and delivered throughout the Bay Area from the back of his Grandmother's Volvo. Shmaltz Brewing now sells He’brew Beer across 35 states, through 40 wholesalers and in nearly 5,000 retailers.

After 17 years of being an outspoken cheerleader for contract brewing, Cowan and staff opened their own New York State production brewery in 2013 in Clifton Park, 10 minutes north of Albany. Shmaltz's home boasts a 50-barrel brewhouse with 30,000 barrels of annual capacity and packages a diverse and tasty variety of core and seasonal favorites in 12 and 22-ounce bottles and kegs. The Shmaltz Tasting Room is open five days a week (Wed-Sun) and offers tours, barrel-aged previews, beer-to-go, and special releases.

RateBeer.com ranked Shmaltz as one of the "Top 100 Brewers in the World" in 2013, and the brewery brought home 10 gold and 6 silver medals from the World Beer Championships in the past several years.

Posted by The Foaming Head at 8:50 AM