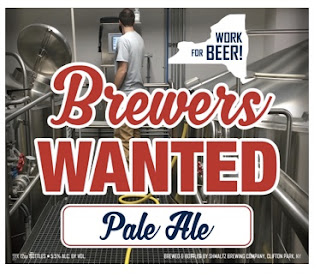 Clifton Park, NY -- Friday, February 19, 2016 -- Just in time for NYC Beer Week 2016, Shmaltz Brewing Company releases a new limited edition seasonal exclusively in New York State, Brewers Wanted Pale Ale -- Work For Beer® (5.5% ABV). With the number of U.S. breweries growing to more than 4,000 in 2015 -- for the first time since the 1870s -- and New York State producing 238 breweries of its own, the demand for skilled brewers is at a record high. Shmaltz helps raise awareness of New York's need for passionate men and women to learn the craft of brewing with a portion of proceeds from Brewers Wanted Pale Ale® directly supporting their new brewer training program. Brewers Wanted Pale Ale® is now available throughout New York State and will be featured at Brewer's Choice during NYC Beer Week 2016 on Wednesday, February 24, 2016.

Brewers Wanted Pale Ale® is a bright and crisp pale ale brewed with 50% NYS 2-row malt, as well as other American malt favorites, hopped with a burst of warrior, simcoe and mosaic and dry hopped with NYS cascade.

Shmaltz Proprietor Jeremy Cowan comments, "In 2013, I made Clifton Park, NY the home of Shmaltz Brewing Company. It is incredibly rewarding to invest the future of our company in a community that's excited about new job opportunities in the local marketplace. Our state and regional workforce development partners have been incredibly responsive to our need for skilled brewers and SCCC is leading the way to develop brewer training programs that will help our industry grow and thrive. What better way to celebrate this public, private, academic partnership, and raise a few dollars and awareness of our need for brewers than with a delicious craft beer, brewed in NY with NYS malts and hops and sold exclusively in New York State."

"Thanks to companies like Shmaltz Brewing and Governor Cuomo's efforts to spur growth, the craft beer industry has risen to a new level in New York State," says Empire State Development President, CEO & Commissioner Howard Zemsky. "The company's innovative partnership with Schenectady County Community College is creating both educational and employment opportunities for students and graduates in a booming industry."

"The Greater Capital Region Workforce Development Boards are proud to partner with Shmaltz Brewing and Schenectady County Community College in a public/private/academic initiative to strengthen the pipeline of workers for the growing Craft Beer Industry in New York State," says Gail B. Breen, Executive Director of Workforce Development Board, Inc. (Fulton, Montgomery and Schoharie Counties). "It is the mission of the GCRWDBs to create a quality workforce for New York State businesses."

"We are very pleased to be partnering with the Shmaltz Brewing Company and other New York State breweries, along with the Greater Capital Region Workforce Development Boards, to start the first regional Brewers Training Program in the Capital Region," says Dr. Steady H. Moono, President of Schenectady County Community College. "At SCCC, we are passionate about developing innovative programs such as this one that trains our students for well-paying and in-demand jobs. We are grateful that a portion of the proceeds from Brewers Wanted Pale Ale® will support our efforts to create an Associate's Degree in Brewing, as well as help build upon our successful credential craft brew course currently in session."

"We congratulate Shmaltz Brewing Company on the launch of this new beer that not only uses New York State local ingredients and supports our farmers, but also highlights the essence of the state's craft beverage producers, who work together to benefit the industry as a whole," adds New York State Department of Agriculture and Markets Commissioner Richard A. Ball. "Training is key to the continued success of our thriving agri-businesses, and we applaud Shmaltz Brewing and all partners involved on the creation and promotion of a program that will focus on the growing workforce needs of craft breweries and encourage future producers."

"We have been seeking talented people to join the brewery. But while Shmaltz, and fellow Upstate, NY Breweries, have found that there is no shortage of men and women who want to work in a brewery there aren't enough brewing schools and training programs to teach them the skills they need to start their brewing career," comments Shmaltz Production Manager, Christian Ryan. "Our Regional Workforce Development Boards and SCCC have truly stepped up to help Shmaltz, our partners, Saranac, Adirondack Brewery, and Rare Form Brewing, create and fund a training program that will meet our current and future workforce needs."

For a comprehensive list of Shmaltz Brewing events featuring Brewers Wanted Pale Ale® throughout Saratoga Beer Week and NYC Beer Week, please visit shmaltzbrewing.com
About Shmaltz Brewing CompanyFounder and owner Jeremy Cowan established Shmaltz Brewing in San Francisco in 1996. The first 100 cases of He'brew Beer® were hand-bottled and delivered throughout the Bay Area from the back of his Grandmother's Volvo. Shmaltz Brewing now sells He'brew Beer across 35 states, through 40 wholesalers and in nearly 5,000 retailers.

After 17 years of being an outspoken cheerleader for contract brewing, Cowan and staff opened their own New York State production brewery in 2013 in Clifton Park, 10 minutes north of Albany. Shmaltz's home boasts a 50-barrel brewhouse with 30,000 barrels of annual capacity and packages a diverse and tasty variety of core and seasonal favorites in 12 and 22-ounce bottles and kegs. The Shmaltz Tasting Room is open five days a week (Wed-Sun) and offers tours, barrel-aged previews, beer-to-go, and special releases.
RateBeer.com ranked Shmaltz as one of the "Top 100 Brewers in the World" in 2013, and the brewery brought home 9 gold and 5 silver medals from the World Beer Championships in the past several years.

For more information, please visit:www.shmaltzbrewing.com
Posted by The Foaming Head at 10:34 PM