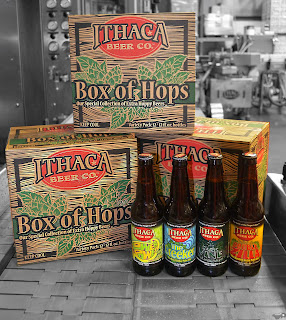 ITHACA, N.Y. – On Thursday, October, 17, 2013, Ithaca Beer Co. will unleash a maelstrom of hop
intensity to fellow craft beer drinkers when it releases Box of Hops – Our Special Collection of Extra
Hoppy Beers.

Box of Hops is a limited release (only 10,000 packs) available in select markets around the Northeast
beginning in late October, but on sale in the Taproom at Ithaca Beer starting Oct. 17th. Double Zilla, Dark
Vine and The Creeker will make limited draft appearances around the Northeast and Ohio in support.

Box of Hops is the first in a new series of variety packs Ithaca Beer plans to introduce over the next year.
A Belgian beer variety pack will debut in Spring 2014, and 5-Barrel Brew collection in the Summer. The
5-Barrel Series is draft only series brewed for the Taproom on a small, 5-barrel brew house. Box of Hops
will return again in October 2014.

MORE ABOUT EACH BEER INSIDE BOX OF HOPS: