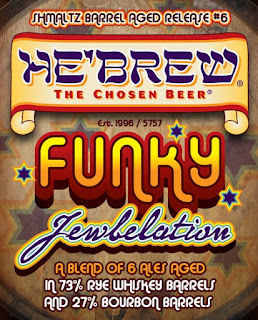 The Limited Engagement Barrel-Aged series not only represents some of Shmaltz's most decorated beers, but also boasts the highest consumer ratings from BeerAdvocate.com and RateBeer.com. The latter recently ranked Shmaltz Brewing as one of the "Top 50 Breweries in the World" for 2012. With the release of Funky Jewbelation®, Shmaltz continues to design unique and sophisticated beers that can stand with the world's best specialty beverages.

About Shmaltz Brewing Company
Shmaltz Brewing Company was named "Best American Craft Brewer" and won the "Best In Show 2010" title by Beverage World Magazine, after being named "Breakout Brand" for 2009. Ranked in 2012 as one of the "Top 50 Brewers in the World" by RateBeer.com, Shmaltz was also included in the "Top 50 Fastest Growing Bay Area Companies" by San Francisco Business Times, and is a recipient of the "Distinguished Business Award" by the Brooklyn Chamber of Commerce.

Established in San Francisco in 1996 with the first batch of 100 cases of HE'BREW Beer® bottled, labeled, and delivered by hand, Shmaltz has sold more than ten million bottles of beer to date. Along with their acclaimed line of HE'BREW Beers®, Shmaltz introduced its new line of sideshow-inspired Coney Island Craft Lagers®. Shmaltz offerings are available in more than 30 states through 35 wholesalers at more than 3,500 retail specialty shops across the U.S., including Beverages & More, Whole Foods, Total Wine, select Krogers and Cost Plus.


For more information, please visit:
www.shmaltzbrewing.com
###
Posted by The Foaming Head at 1:40 PM