With the end of the year approaching, we decided to look back at some of the noteworthy craft beer stories from New York in 2011.

A craft beer drinker has traditionally had two options when seeking out their favorite brews.  The first option is to find a beverage store that carries one's favorite labels.  Over the last few years, this has gotten easier as stores have seen the opportunity to profit off the rise in demand for craft beer, and have started to stock their shelves.  Unfortunatly, I have found that this has brought about several new problems, the biggest one being store owners leaving beer out way past it's maturity date.

The second option for a craft beer fan has been to head straight for the source and purchase beer from a local brewery.  While this is one of my favorite ways to buy beer, it is not always the most practical.  While buying beer from the brewer is usually the most cost-effective and guarentees you the freshest beer, not everyone in New York lives close enough to a brewery to stop on the way home and stock up. 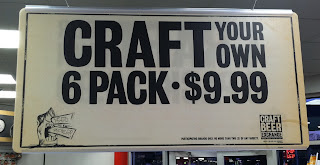 Brewers believe that the next big market opprtunity lies with grocery stores and conveinence stores.  This Summer, Sunoco hopped onto the crowded craft beer bandwagon by starting its Craft Beer Exchange program at twelve of its APlus convenience stores.  The program offerered customers the ability to created a mixed six pack of 12-ounce bottles for $9.99 as well as a choice of 12 rotating taps to fill up 64-ounce growlers.

The Philadelphia-based company started the Craft Beer Exchange in the Buffalo area as a test program at twelve of its stores.  The feedback was so good that Sunoco decided to expand the program to fourteen locations in the Rochester and Southern Tier regions.

The list of Sunoco locations that participate in the Craft Beer Exchange.

I was able to visit the Latta Road location in Rochester, NY over the holiday weekend.  The selection of taps was impressive and the selection of 6 packs was even better.  The beers available to creat your own 6 pack was solid. The prices ranged from about $9.99 to $17.99 per growler with  If there was a downside, it was that 4 of the 12 tap lines were out and that service was a litle slow, although that taps being low might have been due to the holiday weekend rush and the service due to the fact that an elderly man had fallen outside and a Sunoco attendant was dealing with the situation.

Sunoco seems to be onto something here.  The tap area was extrememly clean and the selction available was impressive.  With convenience and grocery stores are the next big thing for the craft beer industry and it will be interesting to see if other local chains such as Stewart's start to stock more craft beers.
Posted by The Foaming Head at 8:28 AM