Shmaltz and Terrapin Team Up To Release Reunion '11 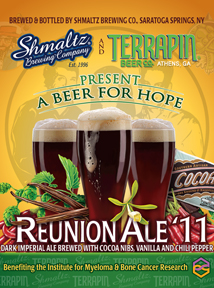 New York, NY - Teaming up as a brewing partner with Terrapin Beer Company and Alan Shapiro of SBS Imports, Shmaltz Brewing is proud to participate for the first time in creating Reunion Ale '11: A Beer for Hope®. Now in its fifth year of production, Reunion® is brewed annually in memory of Virginia MacLean, a dear friend of Alan Shapiro (founder of SBS Imports) and Pete Slosberg's (creator of Pete's Wicked Ale) and a dedicated cancer research supporter who lost her own battle with Multiple Myeloma in 2007. It was her wish to raise funds and awareness on behalf of the Institute for Myeloma & Bone Cancer Research, and a portion of the proceeds from Reunion Ale '11® is donated directly to the IMBCR. Reunion Ale '11® is now available in 22 oz bottles and a limited amount of draft in the nearly 40 U.S. states that receive distribution from Terrapin and Shmaltz, and in Western Canada through Shmaltz's distribution network. National fundraising events will occur throughout the fall and winter. Please see the line-up of upcoming events listed below.

Reunion was conceived initially by Shapiro, MacLean and Slosberg - who all met during the early days of Pete's Brewing Company - as a way to increase awareness of myeloma and bone cancer and raise donations for the IMBCR. Although MacLean passed away just four months after the release of Reunion® 2007, the Reunion project has carried on the vision of these three friends, raising more than $130,000 for the IMBCR through bottle and draft sales of Reunion®, retailer fundraising events, and private donations. "Virginia emphasized the importance of continuing our support of IMBCR," Shapiro explains. "She believed wholeheartedly in the work of the Institute and understood the value of bringing hope to others." "Every dollar we raise goes directly to IMBCR to fund research," adds co-founder Pete Slosberg. Beer lovers can also donate money through the Reunion website, the Reunion Facebook page, or the IMBCR website.

Although Reunion Ale '11® is Shmaltz Brewing's first collaboration with Shapiro and Slosberg, Jeremy Cowan's relationship with the two dates back to the San Francisco craft beer scene in the 1990s. "Shmaltz is extremely pleased to join the Reunion family for 2011," says Cowan. "Tzedakah (charity) is one of the core values of Shmaltz Brewing. To be able to work with longtime industry friends on this project makes it even more special for our entire company."

Reunion Ale '11® is one of several exceptional collaboration projects in which Shmaltz will participate in 2011. The next release will be the second edition of Geektoberfest®, a collaborative blend of six barrel-aged beers from New York brewers Shmaltz Brewing, Captain Lawrence Brewing Company, and Ithaca Beer Company. Geektoberfest® is the official beer of NY Craft Beer Week (Sept. 16 - 25, 2011), and will be available on draft at select Beer Week events and participating beer bars in New York City.

National fundraising and featured beer events will commence throughout the fall and winter to raise funds and awareness for the Institute for Myeloma & Bone Cancer Research. Below is a list of Shmaltz's forthcoming events, and additional events will be added to the online calendar at www.shmaltzbrewing.com.

Wednesday, September 21, 2011 @ Barley's (25 West Washington Street, Greenville, SC): Barley's will have Reunion Ale '11® on draft, and Darren Quinlan will be onsite to answer questions about this special brew.

-Additional featured events for Reunion Ale '11® will take place in Manhattan throughout the months of September and October 2011 at such venues as Rattle N Hum, Rye House, Gingerman, and Lily's. Further details and new events happening in other cities around the country will soon be announced on www.shmaltzbrewing.com.


About IMBCR
The Institute for Myeloma and Bone Cancer Research is dedicated to independent research on developing effective therapies that improve the quality of life and longevity of patients with myeloma and bone cancer. Myeloma and bone cancer are two of the fastest growing diseases in the world, afflicting more than one million people in the U.S. alone.

About Shmaltz Brewing Company
Shmaltz Brewing Company was recently named "Best American Craft Brewer" and won the "Best In Show 2010" title by Beverage World Magazine, after being named "Breakout Brand" for 2009. Shmaltz was also included in the "Top 50 Fastest Growing Bay Area Companies" by San Francisco Business Times, and is a recipient of the "Distinguished Business Award" by the Brooklyn Chamber of Commerce.

Established in San Francisco in 1996 with the first batch of 100 cases of HE'BREW Beer® bottled, labeled, and delivered by hand, Shmaltz has sold more than ten million bottles of beer to date. Along with their acclaimed line of HE'BREW Beers®, Shmaltz introduced its new line of sideshow-inspired Coney Island Craft Lagers®. Proceeds help Coney Island USA, a 501(c)(3) Non-Profit fulfill its mission to defend the honor of lost forms of American popular culture in Brooklyn's historic Coney Island neighborhood.

Shmaltz offerings are available in more than 25 states through 30 wholesalers at more than 3,000 retail specialty shops across the U.S., including Beverages & More, Whole Foods, Total Wine, select Krogers and Cost Plus.