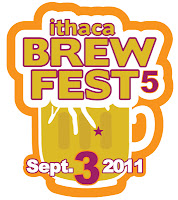 ITHACA, N.Y. - On Saturday, September 3, 2011 from 3:00 – 7:00PM beer and music lovers everywhere will make their pilgrimage to historic Stewart Park on Cayuga Lake for the fifth annual Ithaca Brew Fest. Ithaca Beer Co. and the Cayuga Radio Group are excited to host over 3,000 people coming from all over the country to experience craft beer and gourmet food in this uniquely beautiful setting.


Festival goers will get to sample beers poured by over 45 popular local, regional, and even international breweries. Popular local eateries will be cooking some extraordinary and sizzling dishes beloved by Ithacans. Emceed by Cayuga Radio Group, three musical acts Mosaic Foundation, The Mutron Warriors and The Sim Redmond Band will heat up the stage throughout the festival.


For craft beer fanatics desiring a bigger Brew Fest experience, the VIP ticket will surely deliver the thorough VIP treatment. This year's VIP tent sponsor, La Tourelle Resort & August Moon Spa will host the La Tourelle Lounge inside the VIP tent. VIPs can rest comfortably on leather sofas and chairs in the lounge while munching gourmet food catered by Simply Red Bistro and sipping ultra premium craft beers not easily found in most markets. August Moon Spa will offer complimentary 10-minute back massages in the lounge for VIPs desiring a mini break between beer samples. Exciting giveaways and contests await VIPs in the VIP tent too! Like last year, VIPs will be admitted into the Brew Fest at 2:00 PM, one hour earlier than General Admission, so VIPs can taste all of the beers under the beer tents without the lines! At 3:00PM, when gates open to General Admission, the VIP tent will also officially open so that VIPs can come and go between the VIP tent and main Brew Fest grounds throughout the day. VIP tickets can be purchased in advance only at all ticket locations for $85, but hurry, these tickets are very limited!


Like the four years before, a portion of all ticket sales will go towards the ongoing revitalization efforts at Stewart Park and the Cayuga Lake Waterfront. The Ithaca Brew Fest has helped bring back the Big Pavilion in Stewart Park already, and will continue to work on similar projects inside the park. That Brew Fest takes place in Stewart Park is no coincidence...it's an opportunity for Ithaca to show off the incredible beauty of the Finger Lakes region, showcase their unique culture, and demonstrate why it's so important for the next generation of Ithacans to have a clean, safe, and active park within the community.


Safe and responsible drinking is definitely a top priority at Brew fest. Sponsored by the Ithaca Ale House, TCAT will provide free rides between downtown Ithaca and Stewart Park to Brew Fest Ticket Holders. Taxis will also be available, if a shuttle does not suit you. The Ithaca Brew Fest strongly encourages its attendees to utilize the free shuttle service and taxis, rather than drive at all! Park in the Green St. or Seneca St. parking lot and pick up bus route 13 to Stewart Park. At the end of the night, ride back to the Commons and grab a bite to eat or a pint of beer at one of the many establishments like the Ithaca Ale House downtown!

General Admission and VIP Tickets for the Brew Fest are on sale now at the Ithaca Beer Company, the Ithaca Coffee Company, all Wegman’s grocery stores, and online through the Brew Fest website: www.ithacabrewfest.com. General Admission tickets are $40 in advance--$50 at the door. VIP tickets are available for $85 and can only be purchased prior to the event. Remember, the Ithaca Brew Fest is a non-smoking event. How better to end the summer than one big celebration with great beer, food, music, and unforgettable times in Ithaca, NY!

Manny's on 2nd Ave has many of the beers being showcased in the beer crawl- stop by on the UES!
http://mannysonsecond.tumblr.com/post/9125748357/current-beer-menu-call-to-make-sure-your-favorite