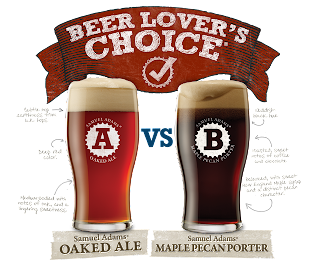 **Editor's Note**  This is the second year in a row that Sam Adams has selected this festival as a polling place.  Here is our review of last year's choices.


Rock Hill, NY. July 13, 2011 - The International Great Beer Expo being held at the Rock Hill Fire Department on July 23, 2011 was just named as an official polling place for the 2011 Samuel Adams Beer Lover's Choice national taste test. It will be one of only two Hudson Valley locations where the voting will take place. Representatives from Samuel Adams will be on hand at the beer festival to meet attendees and to preside over the polling station. www.GreatBeerExpo.com/RockHill

Since 2005 the brewers of Samuel Adams have been offering drinkers a voice in choosing one of the new beers they will introduce in the coming year. This summer the trend continues as the Boston Beer Company, the makers of Samuel Adams, will take two recipes on the road to be judged in a head-to-head consumer taste test. "There were only two Hudson Valley locations selected as official polling places for the 2011 Beer Lover's Choice voting," said Lauren McCarthy, District Manager for the Boston Beer Company. "We selected the International Great Beer Expo at the Rock Hill Fire Department and the Renaissance Fair. We look forward to meeting the local craft beer lovers."

Ticket holders for the International Great Beer Expo at Rock Hill Fire Department will be able to sample and vote for one of the 2011 Beer Lover's Choice contestants:

(SAMPLE A) Samuel Adams® Oaked Ale: a deep red ale with an aroma of mocha and toffee, married with a subtle earthiness from the UK hops. Distinct notes of oak come through in the flavor of this medium-bodied brew. The malty sweetness and slight roastiness of the blend of malts nicely balance this oak character. With a smooth and clean finish, this brew has a lingering sweetness and a hint of oak on the finish.

(SAMPLE B) Samuel Adams® Maple Pecan Porter: sweet New England maple syrup and a distinct pecan character define this balanced porter. The roasted character of the blend of malts complements the maple sweetness with notes of coffee and chocolate. Reddish-black in color, this full-bodied brew has a sweet and slightly tangy nutty finish.

"Each year, we're amazed by how many drinkers across the country participate in the Beer Lover's Choice program," said Jim Koch, Samuel Adams founder and brewer. "The contest gives craft beer lovers an opportunity to enjoy new brews and broaden their palates."

A fire department fundraiser, the International Great Beer Expo (www.GreatBeerExpo.com/RockHill ) will be held on Saturday, July 23, 2011 from 2:00pm-6:00pm at the Rock Hill Fire Department located at 61 Glen Wild Road, Rock Hill, N.Y. 12775. A limited number of tickets will be sold. Tickets are $40 each when purchased in advance at the event website www.GreatBeerExpo.com/RockHill or $55 at the door, if available. Tickets include admission to the event, a souvenir tasting glass, and the freedom to enjoy a 2 oz. sample of any of the beers present at the Expo. Designated driver tickets are also available for $10 each. No one under 21 will be admitted and photo ID is required for every entry. Food will be available for sale, it is not included in the price of the ticket. For tickets and information, visit: www.GreatBeerExpo.com/RockHill