Lake George, NY (May 2011) -- Just in time for the Lake George summer tourist season, the Adirondack Brewery has just released new packaging for its bottled beers and beer cases – eight new labels, each celebrating the iconic legends and tales of the Adirondack Region. Tourists visiting the region will now have the opportunity to drink the finest ale brewed and bottled right in Lake George Village while learning about the great legends that have made Lake George the “Queen of American Lakes.”

From the award-winning summer favorite, Dirty Blonde Ale that highlights the tales of summer romance on the shores of Lake George to the light-bodied lager to the history behind the Iroquois Pale Ale, each craft brew uniquely unleashes the spirit of the Adirondacks.

The concept and design of the new labels is the brainchild of Linda Wohlers, who has a vast knowledge about the history of the Adirondack region. “I wanted to create labels that not only caught the consumers eye, but also told a unique story that was symbolic of the Adirondack region,” states Linda. Each beer label and packaging of the six-packs and cases not only tells a story but also promotes the entire region by offering a brief history and introduction to the Adirondacks,” she furthers.

Below is an explanation of a sampling of the new labels: 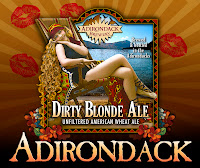 A majestic, crystal clear lake, Lake George has attracted thousands of tourists and second-home owners each summer season. Bringing together downstaters, upstaters and out-of staters, Lake George village becomes a haven for the young, beautiful and the restless, all sharing the same love of good ole’ Lake George. These crowds bring hundreds of bright-eyed young ladies and eager gentlemen who are antsy to fall in love and set their sails free, for a summer of romance. View the label here.

Iroquois Pale Ale – A big American style India Pale Ale (IPA) with a deep orange color, and crisp citrus aroma, Adirondack Brewery’s Iroquois Pale Ale is dedicated to the Iroquois Nation – a powerful force that controlled most of the northeast United States and Canada abut made the land spanning from the Adirondacks to Niagara Falls, their homeland and their hunting grounds. The word "Adirondack" actually means "those who eat trees" in the language of the Iroquois.

Iroquois Pale Ale is dedicated to the powerful and peaceful Iroquois Nation. View the label here.

Fat Scotsman Ale – This big rich and malty Scottish ale is a tribute to Lockhart Mountain in Lake George, which was homestead for the Scottish Lockhart Clan who emigrated from Scotland to Lake George region in the early 1800's, where they settled on what would soon be called Lockhart Mountain. During the French and Indian War, members of the clan served as soldiers in the Scottish Regiments who fought alongside the British and the Iroquois. As history tells us, the Iroquois viewed the British as “wimps” and the Scots as fierce, proud, warriors who never backed down from a rowdy brawl! The Lockhart clan was rewarded from their service in the French & Indian War with a grant of land included all lakefront land on Route 9L north to Dunham's Bay on the water, and over the Mountain to Route 149.

Fat Scotsman Ale is a tribute to the bold Lockhart Clan ad their proud Scottish traditions. View the label here.

Dedicated to Hudson River, a true symbol of New York State whose 315 miles of shoreline connects the largest state park in the country to the largest city in the country, Headwater Hefe Beer celebrates the origin of the Hudson River, which starts from the southwest slope of the tallest mountain in the New York, Mt. Marcy. At an elevation of a steep 4,293 feet lies Lake Tear of the Cloud, is a small tarn located in the town of Keene, in Essex County. It is both the highest lake in the state and the highest source of the Hudson River. We dedicate this beer to the river that links upstate to downstate, and urbanites to country folks, in one proud connection. View the label here.