Long Islanders Vote for Beer of the Year 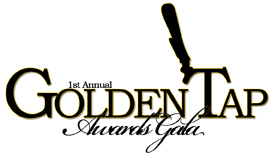 
BAY SHORE, NY. (April 21, 2011) - The Golden Tap Awards Gala, one of the premiere events of Long Island's first Craft Beer Week, will be held at the Boulton Center for the Performing Arts in Bay Shore, NY on May 19, 2011. Awards will be given in a number of "people's choice" categories, including Long Island Beer of the Year. Public voting begins on Thursday, April 21, 2011 at www.LongIslandCraftBeerWeek.com and will end at midnight on Thursday, May 12, 2011. Winners will remain confidential until publicly revealed at the awards gala.

The B.E.E.R (Brewers East End Revival) homebrew club will be presenting the first award of the evening to the winners of the 2011 homebrew competition. The L.I.B.M.E. (Long Island Beer and Malt Enthusiasts) homebrew club, sponsors of the Golden Tap Awards Gala, will present The Beer Pioneer Award to Long Island's Blue Point Brewing Company. "We are very honored to be selected for this great honor," said Mark Burford, co-owner of the Blue Point Brewing Company.

The Lifetime Achievement Award will be presented to Hap Boening, current president of local beer wholesaler, Boening Brothers, Inc. Hap joined the growing family-owned and operated business back in 1950 and, with the exception of 1952 and 1953 when he served in the Korean War, has spearheaded the expansion and growth of the Boening Brothers, Inc. distribution empire.

The emcee for the evening's festivities is Long Island funny man, comedian, Mr. Dan Wilson, best known for his appearances on MTV, A&E, HBO, ESPN and Lifetime. Presenters for the evening include representatives from the beer industry as well as local business owners.

A limited number of tickets will be available for sale to the general public. Tickets include admission to the semi-formal gala, beer sampling, and light fare provided by eatery Milk & Sugar. Tickets can be purchased through the Boulton Center for the Performing Arts box office located at 37 West Main Street in Bay Shore or via their website. Tickets are $55. This is a 21+ event. Funds raised will support Long Island Craft Beer Week (LICBW) and its charity partners. LICBW is a 501(c)3 entity.

Long Island Craft Beer Week will launch next month, May 13-22, 2011 with special events planned for both Nassau and Suffolk counties. The 10-day, island-wide event is a collaborative venture created to raise awareness of the thriving local craft beer culture and promote patronage at local establishments. www.LongIslandCraftBeerWeek.com.