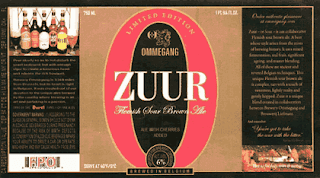 Ommegang's 2010 Innovation program is off to a great start and details on the next few beers are starting to be released.

Stan Hieronymus over at Brew Like a Monk writes that Ommegang has announced the name of their sour ale that will be released in July/August.

he label states: “Zuur – or Sour – is our collaborative Flemish sour brown ale. A beer whose style arises from the mists of brewing history. It uses mixed fermentation, real fruit, significant aging, and master blending.

All of these are ancient and revered Belgian techniques. This unique Flemish sour brown ale is complex, tart with a touch of sweetness, lightly malty and gently hopped. Zuur is a unique blend created in collaboration between Brewery Ommegang and Brouwerij Liefmans.”

Here is the schedule for Ommegang's 2010 Innovation Program.

-- May-June: Ommegang Tripel (the name is not yet confirmed). Around 9%, spiced.

UPDATE: Check out our review of the Ommegang tripel!

-- July-August: Ommegang Sour Ale. Around 6%. This is an Oud Bruin style beer made in collaboration with Liefmans of Belgium. Name to be determined.

-- November-December: Ommegang Adoration returns. It’s 10%, malty , big and spicy. May be tweaked a bit.
Posted by The Foaming Head at 1:01 PM