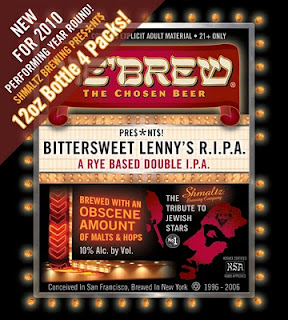 Shmaltz will also be releasing their Bittersweet Lenny's in 12 oz. bottle 4 packs. The beer had previously only come in 22 oz. bottles. The new 4 packs will be available year-round starting in January 2010.

Lenny's was brewed to commemorate the 40th anniversary of the tragic death of legendary satirist Lenny Bruce (R.I.P.A. in 22 oz. bottles was initially released on August 3, 2006), Bittersweet Lenny's R.I.P.A. is brewed with an obscene amount of malts and hops, and soars to 10% alc. With shocking flavors far beyond contemporary community standards, Bittersweet Lenny's R.I.P.A. has been touted by beer aficionados and critics alike as The Most Radical Jewish Tribute Beer ever created.