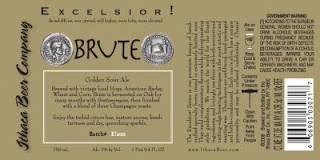 The "tournament" was judged by three "craft-beer aficionados" who sat in a hot tub and tasted both beers. The only criteria was "how refreshing is the brew on a hot day"?

Seven New York brews were entered into the field of 64, but only two made it to the second round. Brooklyn Brewery's Summer Ale knocked out fellow New Yorker Saranac Pale Pale Ale in the first round before losing in the second round. Saranac's Pomegranate Wheat, Summer Brew, Southern Tier's hop sun and Ithaca's Partly Sunny were the other four beers to lose in the first round.
The tournament had quite a New York flavor to it as the first round was took place in Bridgeport, NY on June 20th, the second round in Rochester, NY on June 27th, the third round in Buffalo, NY on July 4th, and the fourth round in Syracuse, NY on July 11th.
Congratulations to the Ithaca Beer Company!
Posted by The Foaming Head at 7:00 AM