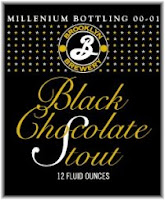 As a huge Syracuse Orangemen (My apoligies to the powers that be at SU. They will always be the Orangemen.) fan, I frequently visit syracuse.com for stories on the teams at 'Cuse. Occasionally, I will come across some good beer related material as Syracuse is a nice craft beer city with Middle Ages Brewing Company, Clark's Ale House, and many other great places to visit.

With the new year here, Don Cazentre wrote a interesting article on what beers go best with each passing month. Cazentre does a nice job pairing the months with beer styles and offers several examples of tasty beers for each style. He also offers a local example for New Yorkers to try.

Cazentre's local offering for Febuary was for those who do not like mixing chocolate and beer but for those who do, I would suggest Brooklyn Brewery's Black Chocolate Stout. These beers are vintage dated and age quite nicely so it is fun to buy a six pack and sock it away each year. Brooklyn also offers a pilsener if you are looking for a local beer to try in August.
Posted by The Foaming Head at 6:03 PM